Looking for cool Stranger Things gifts for fans of the most addictive show on Netflix?

We’ve put together a list of 21 great birthday and Christmas gift ideas for anyone who loves the series as much as we do – including awesome Stranger Things merchandise like clothing, games, jewelry, and much more!  As Eleven would say – “Bitchin’!”

1) “Mornings Are For Coffee and Contemplation” Mug

Chief Hopper is right – mornings are indeed for coffee and contemplation.  Let your favorite fan contemplate the mysteries of the Upside Down… while drinking his or her coffee from this awesome mug! 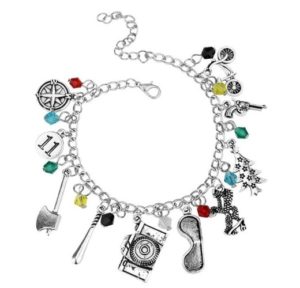 A cute bracelet with charms featuring lots of already-iconic Stranger Things imagery – a great birthday or Christmas gift for female fans of the show!

3) Notes from the Upside Down: An Unofficial Guide to Stranger Things

Your friend or family member may think that they know everything about Stranger Things – but Notes from the Upside Down is chock-full of fascinating new information for them to discover.

It’s just what they need to hold them over until season 3 finally arrives!

Wouldn’t your favorite Stranger Things fan love to spend some afternoons with Mike, Dustin, Lucas, Will, and Mr. Clarke in the Hawkins Middle School AV Club?

This sweatshirt will have them feeling like part of the group!

There are plenty of cool Stranger Things plushies out there – one of our favorites is this 3-piece plush Dart nesting doll.  He starts as a 1-inch pollywog, grows into a 2-inch slug, and finally becomes a 9-inch tall Demodog – and each stage of his growth fits comfortably inside the others! Super-cute – just make sure they don’t let him near their cat!

Eleven, Mike, Will, Lucas, Dustin, and Barb plushies are also available – and there’s even a cuddly plush Demogorgon!  Or, for a truly special present, gift them the whole set! 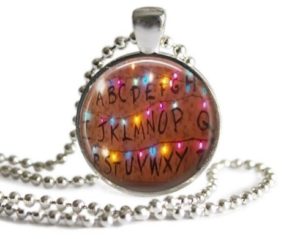 A handcrafted, silver-plated pendant necklace featuring the alphabet lights that Will used to communicate with Joyce from the Upside Down! 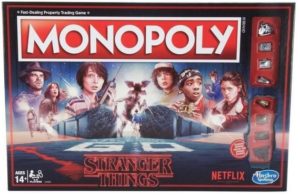 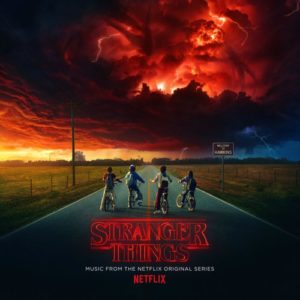 Featuring 19 classic 80’s songs and 11 audio clips from the show, the Stranger Things soundtrack is a must-have for any fan – get it on vinyl for an added touch of nostalgia!

As Eleven always reminds us, “friends don’t lie”… but they do buy each other cute Stranger Things t-shirts like this one! 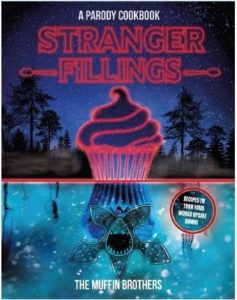 With recipes for Demogorgon-zola Tartlets, Friends Don’t Li(m)e Pie, Baked Brenners, Barb’s Mystery Dip, and more, Stranger Fillings: A Parody Cookbook is a great gift for any fan whose cooking skills are still limited to Eggos! 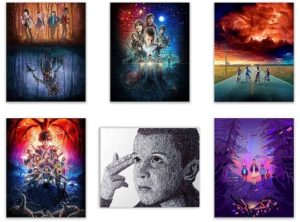 A set of six glossy poster prints from season two of Stranger Things – a unique gift idea that would look great on any fan’s wall!

The Stranger Things Eggo Card Game is a Stranger-Things-themed version of the famous UNO card game.  Have fun playing – but make sure you don’t summon a Demogorgon or get sent to the Upside Down!

One never knows when one might need to communicate with someone in the Upside Down – and with these socks, your gift recipient will always have a pair of alphabet light sets right at their feet!

(Men’s and women’s Stranger Things socks are both available!) 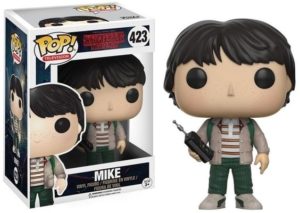 Funko POP! figures are popular among collectors… and they’ve really gone all-out with their line of Stranger Things collectibles!

Not only are Mike (pictured above), Dustin, Lucas, and Will available, but also several different Eleven figures, as well as Steve, Joyce, Jonathan, Nancy, Barb, Hopper, Brenner, Max, and even a Demogorgon… so no matter their favorite character, you’ll definitely find a cool POP! figure to gift them!

Also available from Funko are these cute POP! figure keychains, which make fun, cheap gifts for any Stranger Things fan.  Once again, several different characters are available – including Eleven, of course, pictured above with an Eggo in hand!

Are Demogorgons close to her heart?  Then she’ll love this Demogorgon pendant necklace!

17) The Book of Barb: A Celebration of Stranger Things’ Iconic Wing Woman 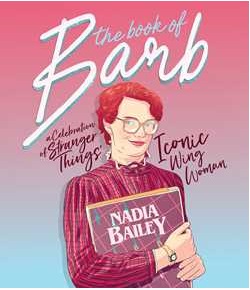 #justiceforbarb!  She may have passed on to the Upside Down – but this book is helping make sure that Barb lives on in our hearts forever! 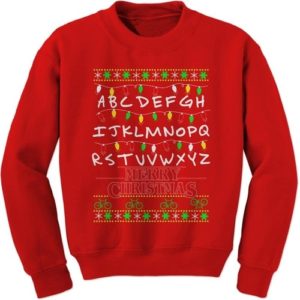 A Stranger-Things-themed ugly Christmas sweatshirt – can you imagine anything stranger than that? 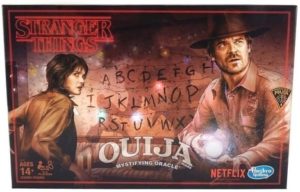 A Stranger Things version of the popular Ouija board game – too bad we can’t ask it what will happen in season 3! 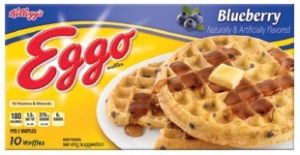 OK, we’re not actually suggesting that you gift them a huge case of 80 Eggo waffles (although they probably wouldn’t complain!) – we just wanted to point out that an Eleven-style Eggo stack could make a fun and delicious alternative to a birthday cake for a big Stranger Things fan! 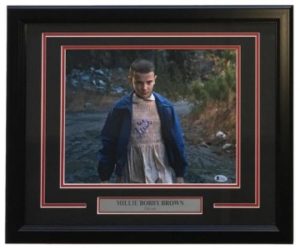 Yes, we’ve saved the best for last: An iconic image of Eleven – autographed by Eleven (Millie Bobbie Brown) herself!

OK, we hope you’ve found the perfect Stranger Things gifts for the fans in your life – and be sure to check out all our other lists to find great gift ideas for the rest of your friends and family!