We’re sure you’ll find the perfect birthday or Christmas presents for the Rick and Morty fans in your life on this list!  It’s got everything from schwifty Rick and Morty merchandise to a plumbus – sure, everyone has a plumbus in their home already, but who couldn’t use another?!

(Before we get to the list, we don’t need to tell you that Season 1 and Season 2 of Rick and Morty on DVD would be a great gift for fans of the show.  As for Season 3 – uh, we’re sure it’ll be here soon…) 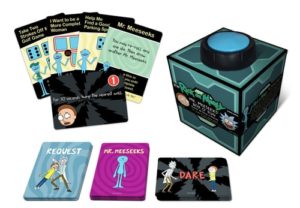 I’m Mr. Meeseeks, look at me!  What better gift could there be for a Rick and Morty fan than a Meeseeks box of their own?  How about a Meeseeks box that includes a fun party game?!

This box will ensure hours of fun for any (adult) fan of the show – and can be played even with people who have never watched.  Just make sure they don’t expect it to take two strokes off their golf game! 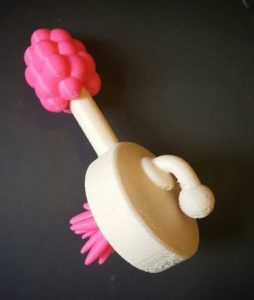 Everyone has a plumbus in their home – but an extra one is always handy!

This regular old plumbus is smoothed out with prime repurposed schleem, and rubbed with only the highest quality fleeb.  Definitely a very practical gift idea – and affordable too, at a cost of just six-and-a-half brapples!

3) The Art of Rick and Morty 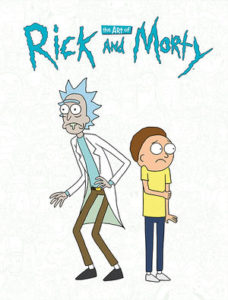 The Art of Rick and Morty is a beautiful hardcover book, just released in September 2017, that gives a fascinating look deep into the Rick and Morty universe – including never-before-seen concept art.  Featuring a special glow-in-the-dark cover, this book is an absolute must-have for any fan of the show!

Anatomy Park is the latest hit Rick and Morty board game, inspired by the episode of the same name and released just this year.  Players enter the body of the homeless man Ruben and work together to build the Anatomy Park theme park.  What could possibly be more fun?! 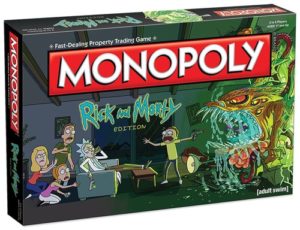 Monopoly like you’ve never seen it before, with flooble cranks and gooble boxes and flurbo currency – and featuring locations from across the Multiverse, including the Cromulon Dimension, Gazorpazorp, and Planet Squanch!

Definitely the squanchiest version of Monopoly in the galaxy!

Rick, Morty, and the rest of the family are available too – including Mr. Poopybutthole, with guaranteed only good memories for your favorite Rick and Morty fan!  Oooh-weee! 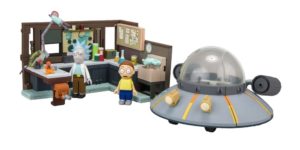 Wouldn’t it be awesome if Rick and Morty’s next adventure brought them right into your gift recipient’s home?  Well, it can – if you gift them one of the brand new Rick and Morty construction sets from McFarlane Toys!

Our favorite is the one pictured above, a 294-piece set featuring both Rick’s garage and his spaceship – but check out all 6 sets! 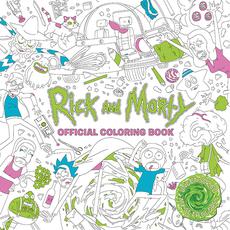 Another brand new Rick and Morty book (released August 2017) that is quickly becoming a must-have for fans of the show, the Rick and Morty Official Coloring Book is chock-full of classic Rick and Morty scenes for your favorite fans to color in themselves!

We’re pretty sure that any Rick and Morty fan would love to get these Mr. Meeseeks pajamas as a birthday or Christmas present – it’s a very practical gift that you can be sure they will use.

Just be aware that, if you buy this for someone, they’re probably never going to stop gleefully saying “I’m Mr. Meeseeks, look at me!” before and after everything they say – you’ve been warned! 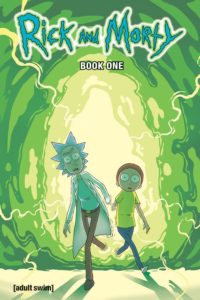 Looking for a gift a Rick and Morty fan who just can’t get enough of the show – and will go crazy waiting for Season 4 to finally arrive?  Well, did you know that there’s actually a series of Rick and Morty comic books inspired by the show?  It’s true!  They’re full of lots more Rick and Morty to enjoy!

And the first ten issues of Rick and Morty comics have now been released in a special hardcover compilation edition (with issues #11-20 being released in a second book in November 2017)! 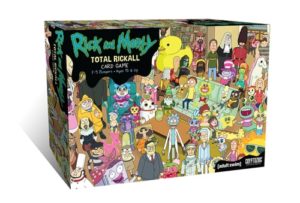 Who’s real?  Who’s an alien parasite?  Rules so easy that even a Jerry could play – with an advanced play option that would challenge even a Rick! 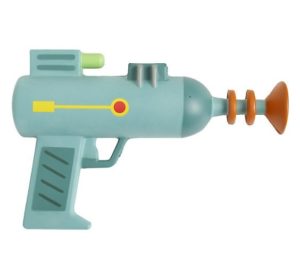 A Rick and Morty laser gun – just the weapon they’ll need for their intergalactic battles!  And it’s the perfect gift to accompany the “Total Rickall” card game – to make sure all those alien parasites are really dead!

(We suggest not gifting this together with the Mr. Poopybutthole plushie though – he’s still a bit traumatized from when Beth shot him…)

The squanchiest hoodie they’ll ever own! 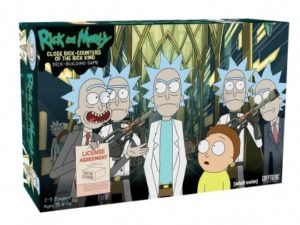 Close Rick-Counters of the Rick Kind is another brand new Rick and Morty game, based on the episode of the same name.  The objective?  Take down the Council of Ricks before they get too annoying and self-righteous!

Every Rick Sanchez needs a Council of Ricks badge, including the Rick Sanchez in your own life!  And each of these high-quality gold enamel pins even includes a unique number identifying which dimension he’s from! 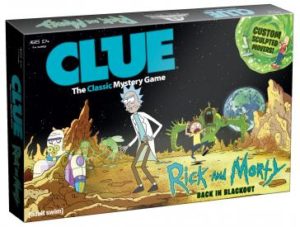 A Rick and Morty Edition of the popular board game Clue!  From USAopoly: “The plans to Rick’s portal gun have been stolen! It’s up to Rick, Morty, Summer, Jerry, Beth and Mr. Poopybutthole to get them back. They must find out WHO stole the plans, WHERE they are hiding, and WHAT item they used to succeed in the heist. It’s an inter-dimensional mystery!”

Okay, we think you get the idea by now… it’s another Rick and Morty edition of a popular game – this time Munchkin! 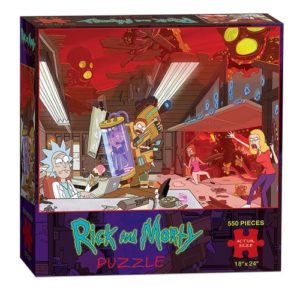 We’re all going to get desperate for ways to pass the time while we wait for season 4.  How about letting your favorite Rick and Morty fan put together a 550-piece corner of the Multiverse?

In addition to the puzzle pictured above, an even more challenging 1000-piece Anatomy-Park-themed Rick and Morty jigsaw puzzle has now been released too! 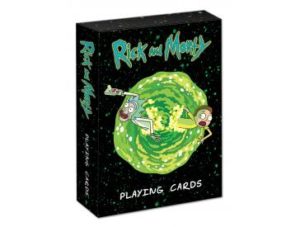 A set of officially licensed glasses – one Rick, one Morty, and one Uncle Steve.  Wait a second…

A set of two officially licensed glasses – one Rick and one Morty. 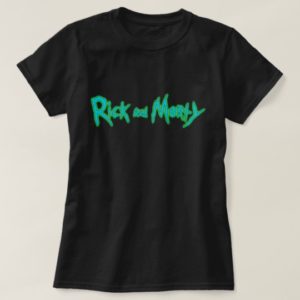 We hope you’ve found awesome Rick and Morty gifts for the fans in your life – be sure to check out our other lists to find gift ideas for everyone else on your list!